Agkistro or alternatively  is a village in the Serres regional unit, Greece. The village is part of the municipality of Sintiki[ and hosts a population of 373, according to the 2011 census.

The municipal unit has an area of 70.937 km2.Agistro lies near the Greek-Bulgarian border and 10 km from the border crossing of Promachonas.The village main tourist attraction is its steam bath complex, which dates from the Byzantine period.

The gold and silver mines found in the mountain of Agkistro, south of the modern village, are believed to have provided valuable material to the armies of Ancient Macedon and especially to the campaign of Alexander the Great, during the 4th century BC, although in archaeological bibliography the specific location has not been identified as one of the ancient mining sites.

The steam bath complex and tower in the village center were erected during the Byzantine period, ca. 950 AD.The latter was later converted into a 20 m high clock tower, possibly during the reign of Emperor Andronikos III Palaiologos (1328–1341). 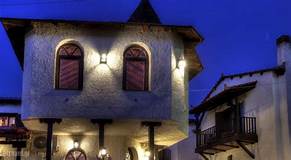