The Church of Saint Demetrius
The Church of Saint Demetrius, or Hagios Demetrios (Greek: Άγιος Δημήτριος), is the main sanctuary dedicated to Saint Demetrius, the patron saint of Thessaloniki It is part of the site Palaeochristian and Byzantine Monuments of Thessaloniki on the list of World Heritage Sites by UNESCO since 1988.
The crypt (catacombs)
Underneath the Church of St Demetrios is the place where St Demetrios, Thessaloniki’s patron saint, along with other Christians of the early Roman period, were martyred.
As the level of the ground gradually rose over the centuries, this area acquired the form of a crypt. According both to tradition and to archaeological findings, it was an old bathhouse, in which Demetrios was imprisoned and eventually martyred in 303 AD. In the 5th century, when the first Church of St Demetrios was built, the site of his martyrdom was 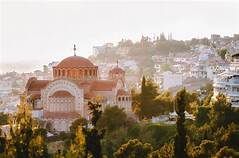 Arch of Galerius (Kamara)
One of the most characteristic monuments of Thessaloniki is the Arch of Galerius, located on the upper side of the Via Egnatia, a short distance from the Rotunda

The Arch of Galerius is a glorious monument, whose purpose was not practical, but memorial and honorary. It is a triumphal arch built shortly before 305 AD to honor the Roman Emperor Galerius, after the final victory over the Persians. The triumphal arch that was positioned perpendicular to the ancient Egnatia, which crossed the city (west to east) forming a part of the Roman Palace of Galerius, which was developed through the current squares of Navarinou and Hippodrome.
The construction design of the arch of Galerius was such as the two major roads to pass beneath it and crossed right in the middle, the current Egnatia Street and the street starting from the Arch and ending at the south gate of the wall of the Rotunda. 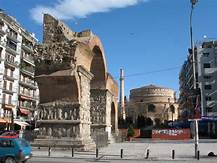 White Tower
Thessaloniki’s symbol, the White Tower is a 15th century fortification which was part of the city’s defenses. The White Tower is the point where the seaward defense and the eastern wall met.
For years it served as a prison for condemned prisoners awaiting execution. In early 1980s it was reconstructed and since 1985 is operating as a museum. Today the White Tower is used as a place of exhibition of the Byzantine Museum of Thessaloniki 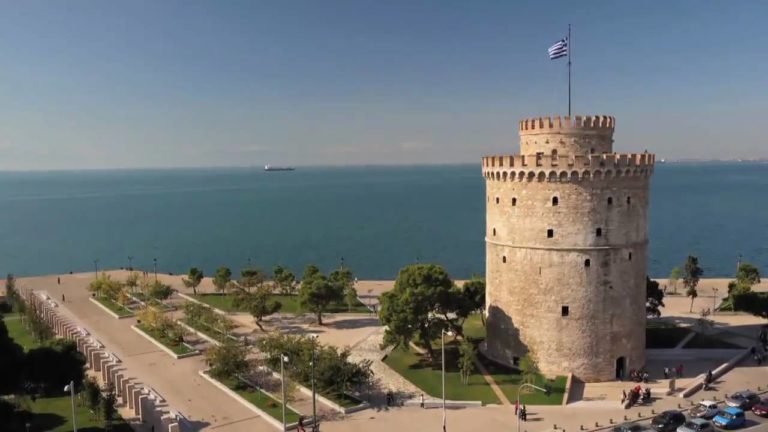 The Roman Forum
The Roman Forum of Thessaloniki is the ancient Roman-era forum (or Agora) of the city, located at the upper side of Aristotelous Square.
It is a large two-terraced forum featuring two-storey stoas, dug up by accident in the 1960s. The forum complex also boasts two Roman baths, one of which has been excavated while the other is buried underneath the city, and a small theater which was also used for gladiatorial games. Although the initial complex was not built in Roman times, it was largely refurbished in the 2nd century. It is believed that the forum and the theater continued to be used until at least the 6th century.
The main feature of the cities during the Roman period was the existence of two avenues, one running north-south and one east-west. In Roman Thessaloniki, the main roads were Via Regia (now Egnatia Street), starting at the Vardar Gate and ending at the Cassandreotic Gate on the east end of the city, and a street perpendicular to Egnatia that probably crossed the city. sea to the Acropolis. At the crossroads of these streets was the Roman Agora.
When it was operating during the Roman period, the Agora consisted of two squares, the one that has been excavated and includes the Crypt Gallery, the Museum of the Roman Agora and the Conservatoire and the one that operated as an open square without arcades and remained below the upper Byzantine era. part of Aristotle’s Square without being investigated. According to the divisions of the Roman Agora revealed, they consisted of a large rectangular square with traces of marble paving in its northwestern part, a boulevard conservatory with shaped masonry stands and a tent in its eastern part and the ground-floor cryptic part Stoa) in its southern part. Still in the southeast corner of the area has been revealed a section of a spa complex comprising an oven (circular sweating room) with 25 baths.

The Famous Umbrellas of Thessaloniki
Most of us – umbrella lovers or not, have seen the famous 13m-high, stainless steel sculpture titled “Umbrellas” on the waterfront in Thessaloniki, Greece. Instagram is full of beautifully taken photos of the umbrellas in different stages of sunset or sunrise or pink for breast cancer awareness month (#thessalonikiumbrellas). They’re one of the most photographed sculptures around the world. You may think it’s a new installation, but it has been an integral part of the waterfront in Thessaloniki, Greece, for more than 20 years.
It was designed by the late Greek sculptor George Zongolopoulos and constructed in 1997.George Zongolopoulos was an important Greek sculptor, painter and architect whose works ever since 1988 frequently included umbrellas theme. He was often called the “eternal teenager” and was a representative of “Generation of 1930s”.
The umbrellas were installed on the waterfront of Thessaloniki in 1997, the year that the city was the European Capital of Culture.
Since then, the umbrellas have taken on different shades of meaning to the residents of Thessaloniki. Some see it as a platform for social campaigns, such as when the umbrellas were illuminated in pink light in an effort to raise awareness about breast cancer. Others have attached more everyday connotations, such as seeing it as a symbol of protection, or as a sign marking the horizon on foggy days.
The fact that “Umbrellas” is a sculpture that a man created in the age of 92 years old add another deep layer to the meaning..
If you’d like to learn more about George Zongolopoulos work visit http://www.zongolopoulos.gr/en/ 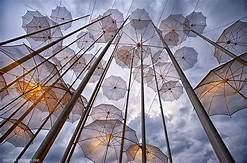